In late 2014 we brought you news of a small tech startup from Oregon USA. They were developing an interactive gas vent called Boomerang 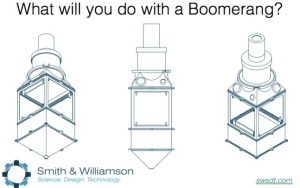 Mark from Boomerang has been kind enough to give us an update on how their product is progressing. Mark said,

“In January we have showed the Boomerang at Academy of Model Aeronautics expo in LA.  It’s an expo for RC airplanes and helicopters and the like. Boomerang got a really good reception from government and academic parties. We showed off the Generation 3 system, show here in a video

In February we did a very brief flight to 15km with the final 3rd Gen configuration of Boomerang.  It was a shakedown flight of technologies that we’ve incorporated and an operational exercise of our Mission Control Station software with enhanced situational awareness tools. We’ve added to Boomerang something we are calling a Passive Parachute Deployment System. We have also added a fill/vent interface called an Inflation Module. You can check out some pictures of the test flight at

Data collected during the flight has given us enough confidence to start work on the 4th Generation system.  This will be baseline version we ship to customers, hopefully in late spring/early summer.  “

Boomerang are currently running two promotions. First there is a competition to win a flight on Boomerang. All you have to do is explain to Boomerang your payload and mission goals.

Then there is the ‘Let us know what you will do with a complete High-Altitude Latex Balloon Altitude Control System’ competition.

Boomerang seem to be making good progress on bringing their product to market and we hope to see a commercial version in 2015.