First off here are a few broad reviews of the camera for terrestrial photographers:

Now let’s go through some of the new Hero 5 features and see if they improve your HAB photography.

The standard weight of the Hero 5 black is 118g including it’s integral housing. This is heavier than the previous models. The housing also makes the Hero 5 larger than previous models but I have been consistently flying mine in their extended housing to protect battery bacpacs, so there is no great change here.

As with the touch screen, this has no value.

This is one of the headline features of both the HERO5 Black and the HERO5 Session. It’s designed to smooth out the jerkiness you can get with unstabilised footage.

I’ve found it to work pretty well in many cases and very well in others. So long as you’re realistic about it, of course. It’s a software solution that does in-camera something similar to the Stabilization feature in Final Cut Pro or Adobe Premier’s Warp Stabilizer.

This may help if the balloon passes through particularly turbulent air… but don’t expect your footage during balloon burst to be any smoother.

There is no great improvement in video resolution from the Hero 4. 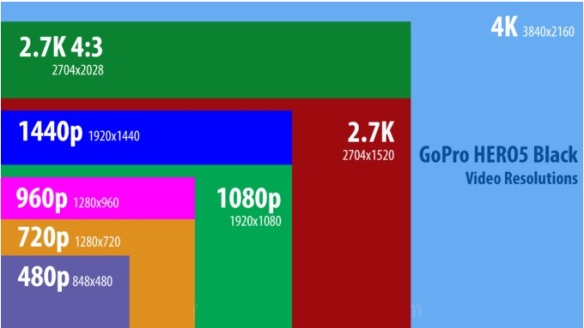 Where there are some differences is in the fields of view, or FOV, offered. The most significant difference is that the HERO5s offer a new Linear FOV that removes fisheye distortion in-camera. This is also available on the still photography. So if you are tired of the lens distortion effect on your images then this would be a camera to try.

Both models have a maximum image size of 12MP (4000 x 3000 pixels). The new Hero 5 camera offers little improvement in the sharpness of images. If you do have the time and patience to post process the images then you may be interested in the RAW image function of the new Hero 5.

This is one of the most contentious features of every camera as it impacts on how long you can use the camera. This is really critical in high altitude ballooning where you cannot just pop another battery in.  The HERO5 Black uses a new, slightly higher-capacity battery (1220mAh vs. 1160mAh). Combined with more power efficient operation, you can get significantly better performance. BUT, some reviews have stated that the battery performance is just less than that of the Hero 4. More critical is the ability to extend battery life. It seems that the Hero 5 does not have a standard battery bacpac. To extend battery life you need to feed in a non standard external battery through the micro usb port.

The Hero 5 offers just a few additional features that are of interest to high altitude balloonists. One of the key improvements is the ability to offer a linear field of view… though this does mean that you won’t be tricking people into thinking that your video shows genuine Earth curvature. But maybe our audience needs a reality check. One big barrier to me buying this camera is battery performance. Most of my flights last in excess of 150 minutes. This camera will not be capturing the payload landing unless I attach a third party battery pac.

Buy or No Buy?

No buy …unless I need to use the linear field of view.