Tracksoar, an APRS tracker built in the US, is releasing an updated version after it’s first production run. Michael Bales from Tracksoar said, “We’ve had a few weeks to get all of our first round of orders shipped and get some feedback from users. We’ve also taken some time to make some minor updates to the Tracksoar to make it even better. We’ve been very happily surprised at the volume of orders we’ve received and all of the positive feedback.

Thanks to one of our excellent customers there is a new version of the firmware that fixes a bug in the BMP180 pressure sensor reporting that was causing inaccurate measurements. Additionally we’ve released a new revision of the Tracksoar main board and Programming shield to fix a couple of minor issues and make it easier to use. You can find the latest release at tracksoar.com/source. “

Mark and  Matt Long,  from Illinios, USA, are attempting to broaden the appeal of high altitude balloon flight by making the output of cameras and meteorological sensors available live via the internet and smart phone apps. Their flight, called Pegasus Mission, is due to take off any day now with a platform packed full of cameras providing live and offline video, as well as a host of meteorological data.

Mark and Matt said, ” Pegasus-II will be a ‘test’ flight that helps us prove scale out of the technologies which means broadening our reach to individuals. It will include 7 radios, 38 sensors, and 6 cameras. One of those cameras is moveable and will stream live video from the flight to enhance the experience. Additionally, we will add phone apps for Android, iOS, and Windows Phones, which will make the experience accessible to many users by exposing real-time telemetry and an updatable map that shows Pegasus-II and the relationship of the chase team. Our Web site will show the same as the phone apps, and also provide a link to the streaming video. We will be adding another interesting experience by allows users to place information onboard the craft during the flight with the apps.

Users will be able to communicate in real-time with Pegasus II during flight via several features below:

Pegasus II launch date and location was set for Tuesday, February 23, 2016 from Kankakee, IL. This was cancelled due to technical faults with the video streaming equipment.”

More information can be found at 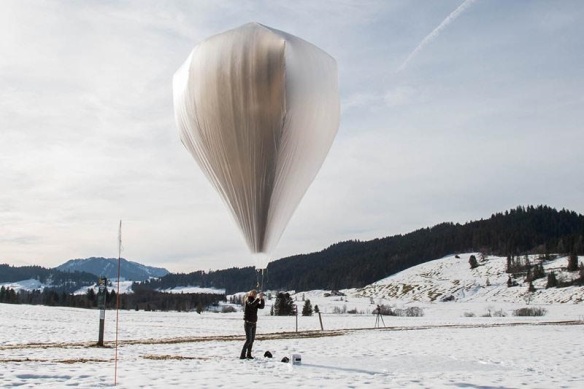 Tomorrow , 15th February, a team from Switzerland are planning to launch their solar balloon in an attempt to cross the Alps. Roman and Christina posted this information about the flight on the UKHAS message board:-

“after moths of preparation we finally will make a flight attempt tomorrow from southern switzerland at aboud 11 am  (UTC).

please join in, if you own a lora-gateway (we’re using david akermans flextrack and gateways, big thanks for his support). as solar balloon flights are log, we will lose our ground station pretty soon and will depend on our car gateway (and cellular internet). any support therefore is highly appreciated!

we’re not sure. this might be the first alpine crossing with a solar ballon.

it would be very nice to recover the payload. if you’re not owning a lora-gateway please press the thumb ;o)

thanks for any support, roman and christina ”

You can listen into the balloon transmissions on 434.454 MHz  USB.

Several companies were hit by hours of system warnings after GPS satellites broadcast the wrong time, according to time-monitoring company Chronos.

The company observed problems last week, after noticing some GPS time signals were 13 microseconds out.

Such a discrepancy is considered sever, and several Chronos telecoms clients faced “12 hours” of system errors.

Previously, the GPS errors had also been blamed for disturbances with BBC radio broadcasts.

According to the US Air Force, which manages the GPS satellite network, problems began when a satellite named SVN 23 was decommissioned.

“He was called from his bed by a network operations centre.”

“What we saw was about 12 hours of problems,” he told the BBC.

Prof Curry said telecoms companies relied on the accuracy of time measurements to control the flow of data through their networks.

The bits and bytes of a telephone call, for example, might be synchronised based on the time as reported by GPS satellite signals.

That signal was constantly monitored for accuracy.

And when the 13 microsecond error had been detected, it resulted in thousands of system warnings being activated at some companies.

“One particular network we have, which is a global network, [was] seeing alarms from all over the place, all over the world.”

Prof Curry said he was not aware of any consequences of these problems that would have been apparent to the public – probably thanks to back-up time systems.

And this kind of issue was extremely rare.

“Last week was an example of something going wrong in a fairly major way,” he said.

“I don’t think it’s gone quite that badly wrong since 1 January 2004, when the same satellite vehicle number [SVN], 23, decided to become unhappy.”

The Resilient Navigation and Timing Foundation (RNTFnd) – which advocates the development of dependable timing systems – also had “minor reports” from the telecoms and energy sectors as a result of the GPS issue.

Dana Goward, the foundation’s president, said, “It [had] a very broad and – very fortunately – minor impact on many infrastructure sectors.”

During the decommissioning of SVN 23, an issue in the “Global Positioning System ground software” had been detected, the USAF said.

But full details of what went wrong, and why more than one satellite became affected, remain unclear.